Several friends have requested the posting of my third-place CWA contest essay.  The theme was "My Kind of Town."  Here it is...

This was my youthful response to many years of the same residential question.  Growing up on the last O blocks on the city limits, I never swayed from my obstinate declaration that I was, and always had been, a city girl.  In all practical terms, those words were technically accurate, but there were many winters when I wondered if my city, too, had thought I was from Elmwood Park, having never seen a plow and witnessing my four brothers and father breaking backs and spirits on the mounds of powder and slush and frozen patches that paralyzed my neighbors during vicious months of blistering temperatures, dangerous ice, howling winds, and that never-ending drifting snow.  The cars would spin and bounce down our street; near miss collisions and fender bender parking were a daily occurrence.  But we participated in the infamous city-living spectacle, which put the rubber stamp on our true address... we placed lawn chairs on the street, marking Dad’s spot for the family station wagon when he went to work.
The residential question paused briefly when the area codes changed.  Elmwood Park became the 708 area, while we city folk maintained our 312 status.  There was no denying where I was from.  The line in the sand had been drawn.  If I had a 312 phone number, well then, I was definitely from Chicago, and I took pride in that fact.  I didn’t want to be a suburbanite.  I didn’t want to be perceived as anything but a working class girl.  That’s what I thought Chicago was because my parents grew up in the city with their working-class families.  I heard glorious stories about “the old neighborhood” (not understanding, of course, that all the “old” places - homes, schools, hangouts, etc.- had been long gone, torn down or fully dilapidated beyond recognition of their memories).  I wanted to live in their city forever.  After all, Chicago was a nostalgic place and an exciting place, too.  Sure I went to school in a suburb each day, and I went to church in a suburb each Sunday, but didn’t the real fun happen in the city?  Field trips to the Field Museum and Adler Planetarium, the Museum of Science and Industry and the Shedd Aquarium... they were in Chicago.  MY Chicago.  Even when I attended college in a suburb, we always looked forward to Schubas or the Green Mill, the Wild Hare or the Empty Bottle (depending on our musical whims.)  The city was alive all the time... it never slept; it kept rolling on and on without stops.  I admired that energy, and every time I picked up the phone to dial a 708 friend, I was reminded of where I lived, in a city unlike their town or village.  So when the area codes changed a second time, when the 312s got split, and we became a 773, we were still Chicago... maybe not the historic city, not the downtown city or lakefront city or ethnic city or inner-city, but still “city.”
Then the big blow came.  The dreaded zip code frenzy.
Our phone number started with 773, not 708.  Our address was listed on an “O” street, not a numbered one.  Our city was listed as “Chicago."  We were NOT listed in the meager suburban directory, but in the mega book of the city directory.  So why, why, did my fine Chicago abandon us?  “Big Tony” was our alderman; we had massive block parties that sometimes got a bit out of hand; we walked to our local dollhouse-sized branch of the Chicago Public Library system; we biked to Hiawatha and Shabbona parks; we took the bus to Cubs games.  Heck, Mom took the bus to her job as a deli worker every day, too.  We were Chicagoans!  Why did we get pushed on to the Elmwood Park zip code?  Couldn’t they handle just a few more blocks of 606s?  All of my city friends had a 606 beginning... 60634 or 60635.  But I was being forced to concede to the dreaded suburban 60707.  The boundaries were announced, and our little square of 16 blocks (eight streets with two blocks each), would have to take a big gulp, swallow our pride, give in to the woeful zip.  That dreaded suburban zip.
My parents are still there, in our humble home of city living.  Mom still takes the bus when she needs to, and Dad still shovels out the street, but his car is parked there most of the time now, so no need for lawn chairs.  During the warmer months, those chairs are on the front porch where they sit and look out at the new neighbors and new generation of children who head west toward our old suburban Catholic school.  They’re still Chicagoans with a 773 area code, living on an “O” block, with a city address and an Elmwood Park zip.
And if there’s one thing I’ve learned from that zip code confusion, it’s this:  no matter where I place my head at night; no matter where I travel or work or raise my kids; no matter my phone number or full address... whenever I’m asked where I’m from, I still say I’m from Chicago.  I guess it’s just my kind of town.
Posted by Geralyn at 8:46 PM

Once my siblings and I could walk and talk, he didn't have that paternal instinct of caring embraces and encouraging words.  We had to simply believe that his love existed and that his pride was buried in the silence of his ironically gentle eyes.  We clung to pictures of him holding our baby bodies; we beamed like gold-medal winners when he offered an uncharacteristic comment or pat on the back; we lived for his approval and acknowledgement; we loved him so much, so deeply, still do. 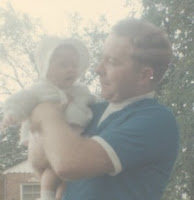 At some point I learned how to relate to my dad.  It was in college when I was living on campus, even though the campus was only a half-hour away.  It was after one of those laundry weekends, when a friend drove me home with my loads of wash, and I visited and did laundry and ate Mom’s pasta.  Dad would drive me back to school the next day... in silence.  I’m not exaggerating.  Those thirty minutes felt like thirty hours.  We seriously did not speak, and it wasn’t because one of us was angry or sad or depressed; we didn’t have anything to say to each other.  I don’t remember what year I was in, but I remember something hitting me.  As usual, I yelled up to a friend’s dorm window and got someone’s attention to come down and help me out as Dad moved the laundry baskets from the trunk to the ground, and I picked them up and brought them to the dorm entrance and Dad was getting back into his car as I called out,”Thanks,” and he waved a hand, never looking back.  He doesn’t know how to do this!  YOU know how to do this, but he does NOT know how.  He can’t, Geralyn, he just can’t!  I rushed to the car before he could get in, I gave him a hug and a kiss on the cheek and said, “I love you, Dad.”  His reply was an uncomfortable, “Uh, huh.”  But I saw it.  Good ole Blue-Eyes got teary.  And he never could control those eyes, and that’s where affection was communicated.

When I received a top honor during my senior year awards night, he was at my side, and I saw him wipe his eyes which meant, “I am proud of you.”

It must have killed him when I went on a retreat, and unbeknownst to my group, loved ones were requested to write letters describing their love for us.  My dad’s letter consisted of three words:  MY (then a photocopied picture) LOVE, DAD.  The photo was of the detergents “Pride” and “Joy.”  Letting my lashes meet, I thought of my father, blurry and watery, sealing up that piece of paper in an envelope and writing my name on it, and I cried, touched.

When he walked me down the aisle, one arm was linked with mine while biting his lip, holding back, meaning “Congratulations.  I wish you the best.”

Dad and I talk all the time now.  There’s no awkwardness.  I need him for my genealogy projects, and he’s accustomed to the questioning I won’t back down on, so he’s honest and interesting.  I love hearing about the old days, and he’s open to discussing them, most of the time.  I’m a parent, so we talk about the kids, and my sons are athletes, so his favorite topic of sports is no longer lost on me.  He’s been there for me during some rather difficult times, unexpected phone calls offering brief advice or a favor.  I admire his loyalty to his faith and family, and I’ve come to understand that he may not have the words for affection, but he feels it.

I cherish the moments I have with my dad, and I still hear him talking to me through his eyes.  Like the time he “told” me how excited he was to have another generation of athletic games to attend.  It was during my fifth grade son’s first game, and it happened just inside the three-point line, a long shot completely on target and SWOOSH!  The crowd went wild, and I looked over to my son’s papa, finding him with his head in his hands.  Or the time my youngest son took the mound for the first time and struck out a player, his teammate/brother hollering approval from third, and I stole a glance at Papa smiling ear to ear with a hand over his eyebrows blocking the set sun.
Ever since that awakening day in college, when I learned to appreciate my father, not a visit or phone call goes by without my telling him those words, so I'll end this piece with that special phrase...  I love you, Dad.  (Big hug and kiss.)  HAPPY FATHER'S DAY!!
* * * * * * * * * * * * * * * * * * ** * * * ** * * * * * * * * ** * * *
If you're interested in reading other "dad-themed" works, check out some blog posts by members of the Chicago Writers Association:
Mary T. Wagner...
http://runningwithstilettos.blogspot.com/2010/10/tool-time.html
http://runningwithstilettos.blogspot.com/2009/08/vigil.html
Rebecca Kiel...
Http://rebeccakielpages.blogspot.com
Posted by Geralyn at 2:53 PM

Geralyn
I have an M.Ed in the teaching of secondary language arts and have taught English at the middle school, high school, and community college levels. I also host this personal blog, "The Roles of Writing," where I pen essays and poetry about everyday life, writing, and literature. Presently, I am working on my first novel, a book of historical fiction.